Updates from the 2019 ADA meeting

Stay abreast of the latest news that could influence diabetes care. Pam Brown and Jane Diggle report from the 79th Scientific Sessions of the American Diabetes Association. 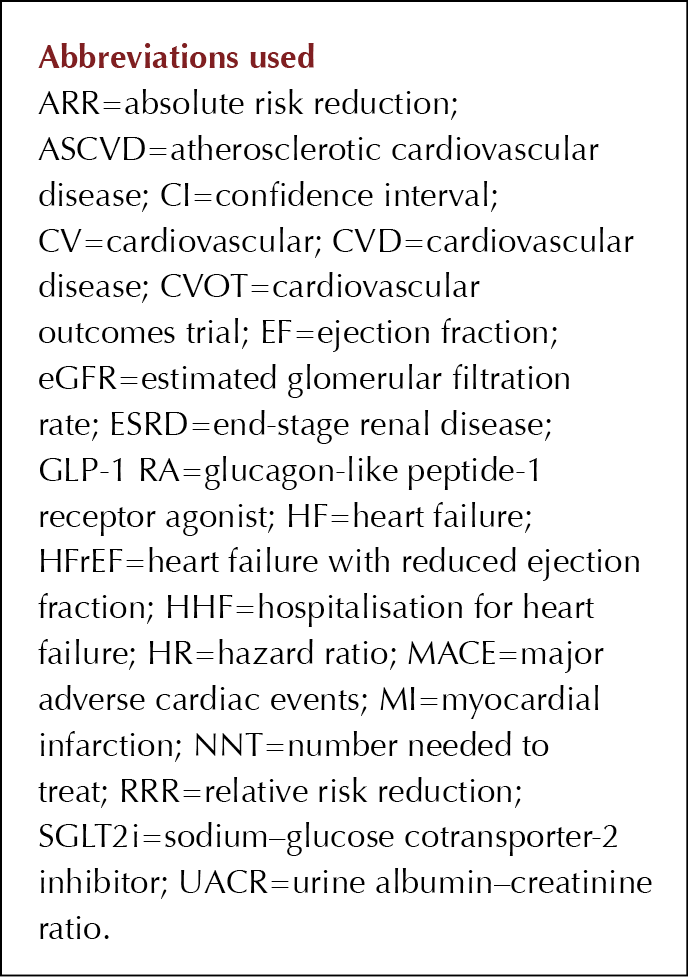 REWIND (Researching Cardiovascular Events with a Weekly Incretin in Diabetes)

Key points
Dulaglutide once-weekly reduced major adverse cardiovascular events (MACE) by 12% compared to placebo in people 50 years and older with type 2 diabetes and either a previous myocardial infarction (MI) or stroke (20.8%), established cardiovascular disease (CVD; 31.5%) or CV risk factors (just under 70%). This was largely driven by a significant reduction in non-fatal stroke and was similar to MACE reduction with liraglutide in the LEADER cardiovascular outcomes trial (CVOT).

3-point MACE significantly decreased in both those with previous CV events and those with only CV risk factors, with no evidence of heterogeneity between the groups.

The renal component of the composite microvascular secondary endpoint was also significantly reduced (relative risk reduction [RRR], 15%), mainly due to a reduction in the incidence of new macroalbuminuria (RRR, 33%), but this should be considered an exploratory analysis and further studies are ongoing to confirm this.

There was no difference in efficacy between the primary prevention cohort and those with established CVD.

Compared to cardiovascular outcome trials (CVOTs) of other GLP-1 RAs, individuals in the REWIND trial were at lower risk of CV events. Two thirds of participants did not have CV disease at baseline. Reflecting on the results, the authors concluded that “dulaglutide could be considered for the management of glycaemic control in middle-aged and older people with type 2 diabetes with either previous CVD or CV risk factors”.

Owing to non-significant results higher up the statistical hierarchy of the study, the renal data should be viewed as an exploratory analysis or “hypothesis-generating” only.

It is important to remember that SGLT2is and GLP-1 RAs are only currently licensed for glucose-lowering and not for heart failure, renal disease or ASCVD prevention or management. Only initiate these drugs if you know how to use them safely. Further guidance is available in How to use SGLT2 inhibitors safely and How to use GLP-1 receptor agonist therapy safely and effectively.

About the study
Methodology and design

Key points
Initial results of the DECLARE-TIMI 58 CVOT with dapagliflozin were discussed in the Journal previously and were presented at ADA, along with CV data published in Circulation earlier in 2019 and new cardiorenal secondary endpoint data. When reviewing results from this study, it is important to highlight that only 41% had previous CVD and only 7% had an eGFR <60 mL/min/1.73 m2. This is, therefore, a much lower risk population for CV and renal events than in other CVOTs with SGLT2 inhibitors.

Cardiorenal- and renal-specific endpoints were reduced across a range of pre-specified baseline characteristics, including those with and without ASCVD. These renal data were simultaneously published in The Lancet Diabetes & Endocrinology (Mosenzon et al, 2019).

The speakers concluded that dapagliflozin may be effective in the prevention and treatment of renal complications in a broad range of populations, including those with and without ASCVD, but it should be remembered that SGLT2 inhibitors are not currently licensed for initiation in those with eGFR <60 mL/min/1.73 m2 and must be stopped if eGFR is sustained at <45 mL/min/1.73 m2.

Since only one of the co-primary endpoints was significantly reduced, all other endpoints, including the cardiorenal data presented, must be considered as hypothesis-generating even if statistically significant.

Sub-analyses by baseline MI, CVD and HF
MI was identified as a baseline characteristic of interest to permit sub-analysis. There was a significant 16% RRR in MACE in those with prior MI at baseline, but not in those without previous MI (including those with established ASCVD but no MI; Furtado et al, 2019).

When data from the 59% of people in the study with multiple risk factors but no established ASCVD were examined, the RRR in CVD death/HHF was significant and similar to that recorded in those with established ASCVD but, again, there was no reduction in 3-point MACE in this group. These findings may influence licence change in future.

When data from those with HF at baseline were examined, there was an RRR in HHF seen in those with and without HFrEF, but CV death was reduced only in patients with HFrEF (Kato et al, 2019). There was a tendency for those with worse ejection fraction to receive the most benefit when treated with dapagliflozin.

About the study
DECLARE-TIMI 58 was the largest of the SGLT2i CVOTs to date, with more than 17,000 participants (only 41% of whom had established CVD at baseline) followed for a median treatment time of 4.2 years. 3000 had previous MI at baseline. It is the only SGLT2i CVOT to date to collect baseline HF data and baseline left ventricular ejection fraction in 5000 participants.

Key points
CREDENCE is a CVOT with canagliflozin in those at high risk of renal disease (50% CV disease at baseline, 59% eGFR <60 mL/min/1.73 m2). A significant 30% reduction in the cardiorenal composite primary endpoint was discussed in the Journal previously.

The pre-specified CV secondary endpoints in those with albuminuria were presented and discussed at ADA. There was:

Cardiovascular data
Canagliflozin was demonstrated to reduce MACE and renal outcomes in a broad spectrum of sub-groups, including those with and without CVD at baseline. Presenting the data, Professor Bernard Zinman concluded that canagliflozin could be effectively used for primary and secondary prevention of major CV and renal events in people with type 2 diabetes and chronic kidney disease. Guideline and licensing changes to support this are not yet in place.

Summaries of the CV and renal outcomes by primary and secondary CV prevention cohorts are shown in Table 1. 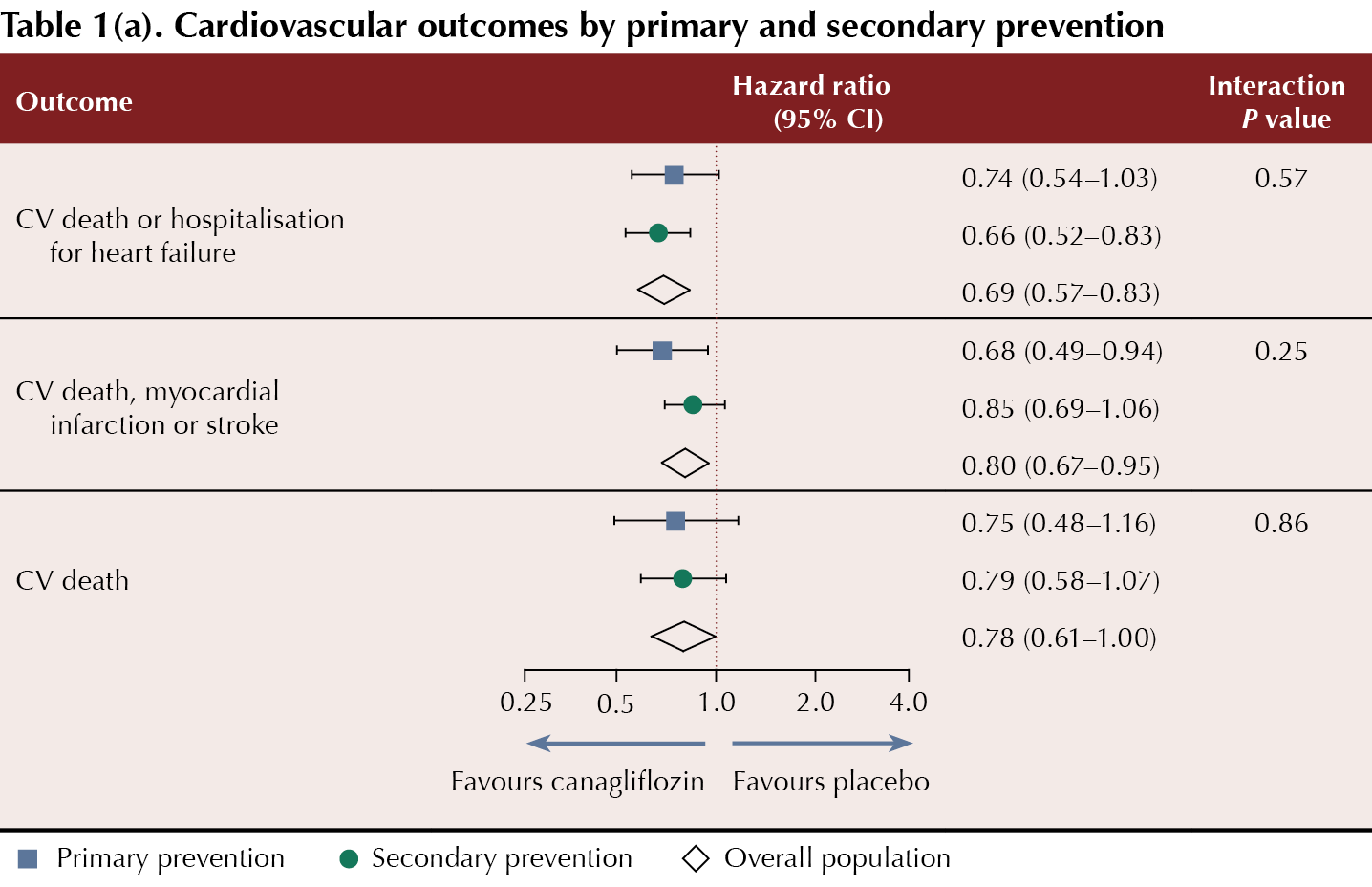 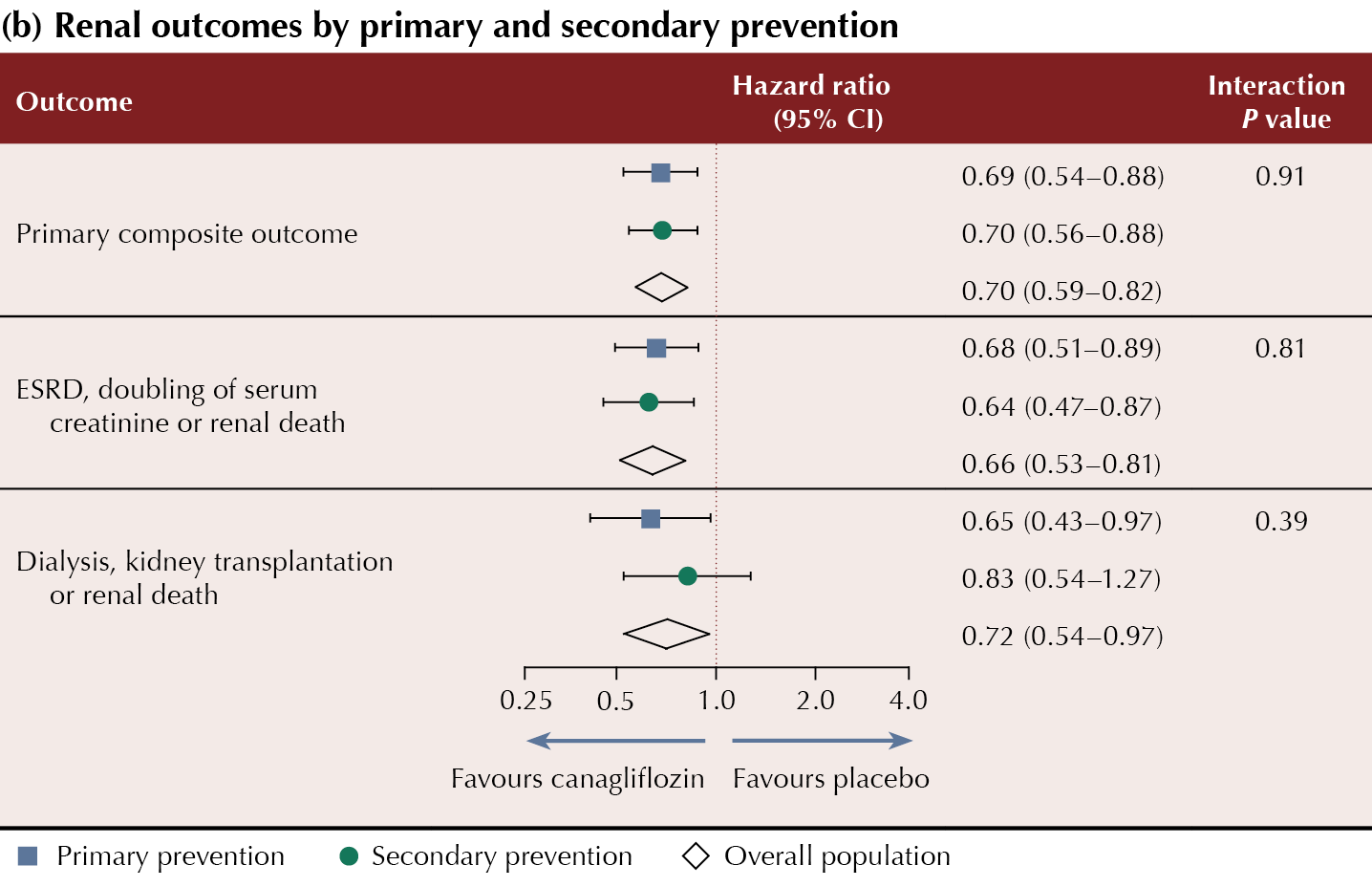 There were seven pre-specified secondary outcomes, including 3-point MACE, the composite of CV death and HHF, and HHF alone.

Limitations
The study was stopped early at the recommendation of the independent monitoring panel after a pre-planned interim analysis once 405 events were achieved, which demonstrated that the primary outcome had been met. As the trial was stopped early, this may have impacted the power for some of the secondary outcomes that were not significant (e.g. CV mortality rate). People with an eGFR <30 mL/min/1.73 m2 were excluded from the study and, therefore, it is not known whether the findings can be generalised to this population.

Mosenzon O, Wiviott SD, Cahn A et al (2019) Effects of dapagliflozin on development and progression of kidney disease in patients with type 2 diabetes: an analysis from the DECLARE-TIMI 58 randomised trial. Lancet Diabetes Endocrinol 7: 606–17

Supporting type 2 diabetes self-care across Wales during a pandemic

Need to know guide: Making sense of blood pressure readings in those with diabetes

How to diagnose and treat hypertension in type 2 diabetes

Evidence that protection against type 2 diabetes offered by some antihypertensive drugs.

A printable guide to SGLT2 inhibitors, organised by drug and by indication.