Diabetic nephropathy (DN), which is hyperglycaemia-induced glomerular disease, is one important element of DKD. However, hypertension, renal atheroma and ischaemia are also common in diabetes, and cause varying degrees of glomerulosclerosis and tubular fibrosis. The relative dominance of these pathologies gives DKD variable clinical features. This is why proteinuria, which is the hallmark of DN, can sometimes be absent in DKD.

Both type 2 diabetes and chronic kidney disease (CKD; of any cause) are fairly common conditions. It is possible, therefore, that they could coexist in an individual without there being a causal link. Furthermore, as noted above, the clinical features of DKD may not always be typical. Accordingly, some judgement is required when attributing renal disease to DKD rather than other, possibly remediable, conditions. Important examples of these include glomerulonephritis, ureteric obstruction and myeloma.

In a person known to have had type 2 diabetes for at least 5 years, with a gradually rising albumin:creatinine ratio (ACR) followed by a gradually falling estimated glomerular filtration rate (eGFR; over months or years), particularly if there are microvascular complications elsewhere, it is reasonable to make a presumptive diagnosis of DKD. Regular monitoring will allow re-evaluation to ensure that the condition is following the expected natural history.

A diagnosis of DKD should be re-evaluated if there is rapid onset of heavy proteinuria, an unexplained, unusually rapid fall in eGFR, the presence of non-visible haematuria or the onset of new systemic symptoms. In these circumstances, renal ultrasound should be requested and referral to a specialist may be indicated.

How should we manage a first slightly raised ACR reading?
A confirmed ACR above 3 mg/mmol is abnormal in both men and women. Even this low level of proteinuria is associated with risk, so the term “microalbuminuria”, which was coined to describe something preceding “true” proteinuria (i.e. when protein is detectable with a urine dipstick), is now obsolete. Significant proteinuria exists when the ACR is >3 mg/mmol.

Proteinuria implies glomerular damage and is usually the first sign of DKD. Detecting it is important, as it is a marker of increased cardiovascular (CV) risk. The 10-year mortality of people with type 2 diabetes who have an ACR >3 mg/mmol* is about four times greater than those with a normal ACR (Afkarian et al, 2013).

An abnormal ACR should prompt rigorous management aimed at mitigating vascular risk. The importance of a healthy lifestyle (smoking cessation, weight reduction and exercise) should be reiterated, and the quality of lipid and glycaemic control re-evaluated.

Blood pressure (BP) control is particularly important and should be treated to a target of <130/80 mmHg, if this can be attained without symptoms (NICE, 2014). Because drugs acting on the renin–angiotensin–aldosterone system (RAAS) reduce intraglomerular pressure, they have renoprotective properties beyond those due to BP lowering alone (Brenner et al, 2001). They are, therefore, the antihypertensive agents of choice in this group. Either an angiotensin-converting enzyme inhibitor (ACEi) or an angiotensin receptor blocker (ARB) should be commenced and titrated to the highest tolerable dose over a few weeks.

What is the difference between ACR and PCR, and why is ACR preferred in people with diabetes?
ACR and PCR (protein:creatinine ratio) are both measures of urinary protein. A ratio of protein or albumin to creatinine (mg/mmol), rather than a concentration (mg/L), corrects for variable urinary dilution. Whilst ACR specifically measures albumin, PCR measures all the proteins in the urine.

Although PCR remains useful for quantification, it is not recommended for detection of protein. ACR is more sensitive than PCR at detecting the low protein concentrations that guide effective risk management. Most clinical studies of the relationship between urinary albumin and future risk in patients with diabetes have used ACR. This is why it is the preferred measure in clinical practice.

The ACR may be spuriously raised by exercise. Accordingly, if a random urine sample yields an ACR between 3 and 70 mg/mmol, a repeat test on an early morning urine sample should be undertaken. If at least two early morning ACRs >3 mg/mmol over at least 4 weeks indicate that the high ACR is sustained, the presence of proteinuria is confirmed. A random ACR >70 mg/mmol cannot be attributable to anything other than significant pathology and a repeat measurement is not necessary.

What is the merit of measuring serum cystatin C in assessing renal decline?
Renal function is usually measured using the eGFR, which is computed from the serum creatinine concentration, age and sex of the individual (with a correction factor for race). The serum creatinine level is a convenient biomarker of renal function, but it can be affected by non-renal factors; creatinine is derived from skeletal muscle, and blood levels are influenced by muscle bulk and dietary meat intake. This can lead to misleading eGFR results in some individuals.

Cystatin C is a 120-amino acid protein that is made and secreted at a fairly constant rate by all nucleated cells in the body. Because it is freely filtered at the glomerulus, its level in the blood can be used to provide an accurate measure of GFR. The result is unaffected by diet, muscle bulk or age. Several reports have suggested that cystatin C is superior to creatinine in detecting the earliest signs of renal damage (Shlipak et al, 2013).

In 2014, after a review of clinical studies and health economic evidence, NICE recommended the use of cystatin C as a confirmatory test where diagnosis of CKD based on a creatinine-based formula is in doubt. This may be the case when the eGFR is 45–59 mL/min/1.73 m2 and there is no proteinuria (CKD category G3aA1; NICE, 2014). Despite this, its uptake in clinical practice has been slow.

How often should eGFR and ACR be measured in people with DKD?
The frequency with which renal biomarkers should be monitored in DKD depends on the severity of renal disease. CKD is classified by eGFR (categories G1 to G5) and ACR (categories A1 to A3). The higher the category for each variable, the greater is the risk of cardiovascular disease and progression of CKD.

According to current NICE guidance, at CKD category G1–G2, the eGFR should be undertaken at least annually (NICE, 2014; Table 1). At category G3a–G3b, this should increase to six-monthly. Patients at category G4–G5 are often under the care of specialist services and the frequency of monitoring will be determined by individual circumstances, but a check of renal function at least every 3 months is usual.

As long as a patient with diabetes is at ACR category A1 (<3 mg/mmol), the ACR should be measured annually. Once the ACR is abnormally raised, there is no clear guidance on the optimum frequency of measurement. One could argue that, once the presence of proteinuria has been established and appropriate risk management has been undertaken, repeated measurements add little useful information. However, as noted above, the level of ACR (CKD categories A2–A3) correlates directly with CV and renal risk, so accurate risk assessment depends on a comprehensive understanding of the markers of vascular and renal damage. An annual ACR check should, therefore, be done even when the presence of proteinuria has been established. 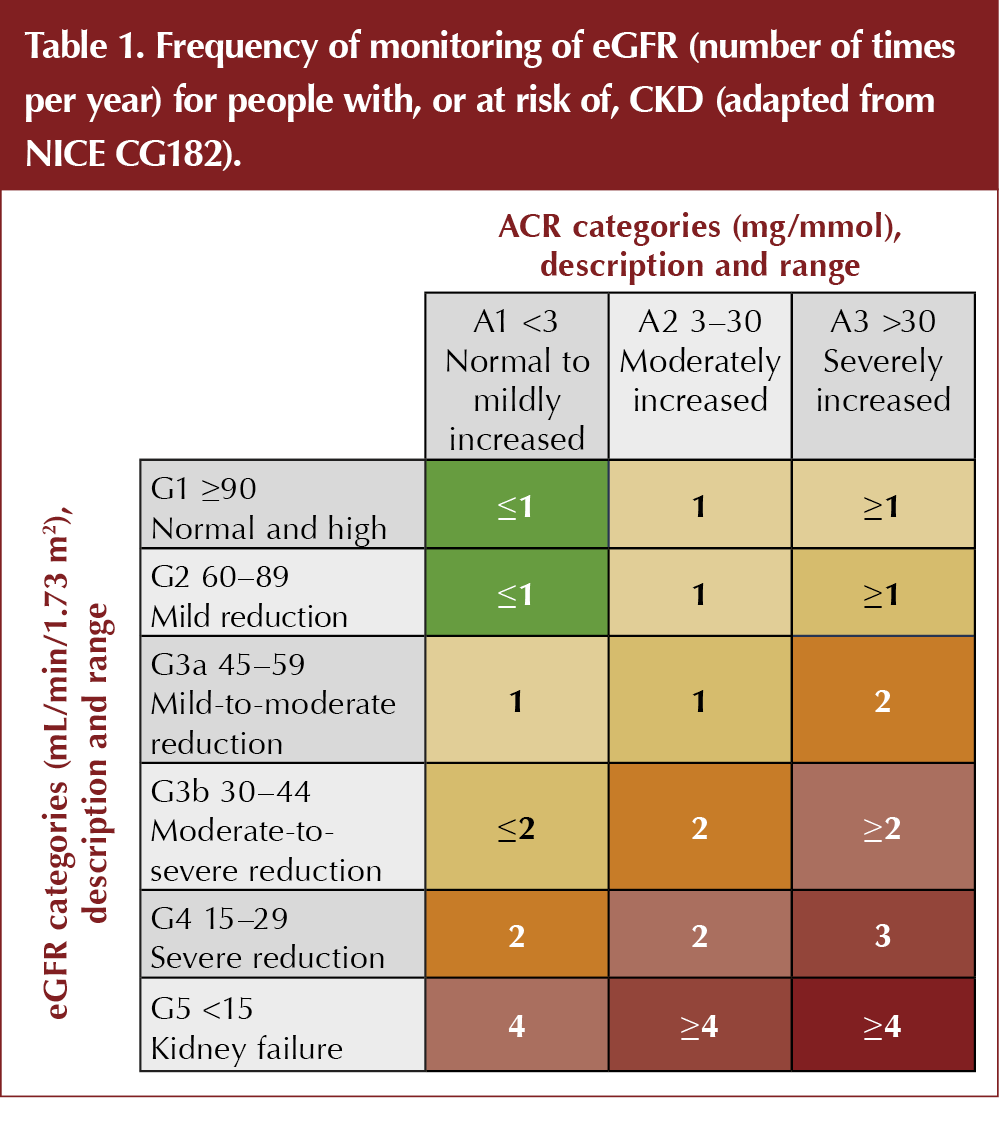