Ghasem Yadegarfar, Mark Livingston, Gabriela Cortes, Ramadan Alshames, Kate Leivesley, Ann Metters, Linda Horne, Tom Steele, Adrian H Heald
Many people with type 1 diabetes continue to have high HbA1c levels despite insulin therapy, with an associated elevated risk of cardiovascular events and increased mortality. Adjunctive prescription of a sodium–glucose cotransporter 2 (SGLT2) inhibitor in type 1 diabetes has been approved as a potential intervention. In this case series, the authors report the outcomes of six adults with type 1 diabetes who initiated on dapagliflozin in East Cheshire. Over a 6-month period, mean HbA1c fell from 78.5 mmol/mol (9.3%) to 55 mmol/mol (7.2%). Analysis of flash glucose monitoring data showed that the proportion of readings in the target range (4–10 mmol/L) increased from 33.1% to 65.2% following addition of dapagliflozin, while the proportion of readings above target (>10 mmol/L) decreased from 68.0% to 26.4%. Dapagliflozin was well tolerated and improved glycaemic control with no increase in hypoglycaemia rates.
Save, Share, Print Article
Share this article
+ Add to reading list – Remove from reading list
↓ Download pdf
The achievement of better glycaemic control remains a challenge for people with type 1 diabetes and their healthcare professionals. Despite major advances in the pharmacological management of type 1 diabetes in recent years (Iqbal et al, 2018), with widespread availability of insulin analogues and increasing access to expert patient programmes, many people with type 1 diabetes continue to have high HbA1c levels (Anderson et al, 2012; Heald et al, 2018). Studies suggest that less than one third of people with type 1 diabetes achieve optimal glycaemic control (an HbA1c of <53 mmol/mol [7.0%]; McKnight et al, 2015; Miller et al, 2015), with similar results observed using data from the National Diabetes Audit (Heald et al, 2018). Suboptimal glycaemic control is associated with increased likelihood of cardiovascular disease and associated events (de Ferranti et al, 2014).

Intensive insulin management is currently the only option for effective treatment of type 1 diabetes. However, even when target HbA1c levels are achieved, there is still evidence of excess mortality rates in people with type 1 diabetes (Lind et al, 2014).

Sodium–glucose cotransporter 2 (SGLT2) inhibitors block the SGLT2 transporter in the proximal renal tubule, resulting in glucosuria and natriuresis, and are approved and indicated for the treatment of type 2 diabetes (Kalra, 2014). Owing to their oral route of administration, low risk of hypoglycaemia and proven cardiovascular and renal benefits in type 2 diabetes, there is increasing interest in using these drugs for the treatment of type 1 diabetes, with two recent clinical trials demonstrating their efficacy in this regard (Dandona et al, 2018; Mathieu et al, 2018).

Continuous glucose monitoring (CGM) devices display an estimate of blood glucose levels along with trends in direction, either in real time or with intermittent scanning. In the eyes of many, they are proving to be a step change in type 1 diabetes management, and they are now widely used in the UK and elsewhere. Use of CGM itself is associated with a reduction in HbA1c (Pickup et al, 2011; Heald et al, 2019).

The DSN team in Eastern Cheshire works across a mixed urban and rural catchment area south of the conurbation of Greater Manchester. It provides an outreach service to GP practices across the area, as well as clinics at a central location. There are at least 1000 people known to have type 1 diabetes in Eastern Cheshire, of whom the majority are managed in primary care. The specialist service sees people with type 1 diabetes in an episodic care model so that, once glycaemia has been stabilised, the person with diabetes returns to primary care.

In this article, we describe our experience of adding dapagliflozin to insulin therapy and its impact on HbA1c and glycaemic profile.

In this real-world study, we report the outcomes of six adults (18 years of age or older) with type 1 diabetes who initiated adjunctive dapagliflozin treatment after continuing to have suboptimal glycaemic control in spite of intensive treatment with a basal–bolus insulin regimen. Dapagliflozin was initiated with education and support from one of the DSNs. All participants had an HbA1c of 70 mmol/mol (8.6%) or higher prior to initiation. All had been monitoring glycaemia with the FreeStyle Libre flash glucose monitor for at least 6 months prior to this.


Dapagliflozin was prescribed at the dose of 5 mg daily. Dose adjustments in insulin were subsequently made but contact continued at the same frequency as before with the DSN team. None of the participants attended an expert patient education programme during the follow-up period, nor had they attended such a programme in the previous 12 months.

HbA1c was recorded at baseline, at 3 months after the start of monitoring and at 6 months for all patients. BMI was recorded at the time of initiation of monitoring. Subsequent monitoring of BMI was not possible because of changes in patient contact with general practice and specialist services in the UK as a consequence of the COVID-19 pandemic.

This was a quality improvement project. Ethics approval was not obtained for this study, as the treatment was being given as part of standard care according to NICE (2015) guidance. All individuals’ data were anonymised prior to statistical analysis.

Comparison of HbA1c pre- and post-dapagliflozin initiation was made by paired t-tests. Outcomes were reported as means with 95% confidence intervals (CIs) and their range. Data were analysed using STATA 14 (StataCorp LP, College Station, TX, USA).

All six people were on a basal–bolus regimen prior to starting dapagliflozin. One of the individuals was on insulin glargine and five were on insulin degludec. For their short-acting insulins, four were on Novorapid, one on Apidra and one on Fiasp. 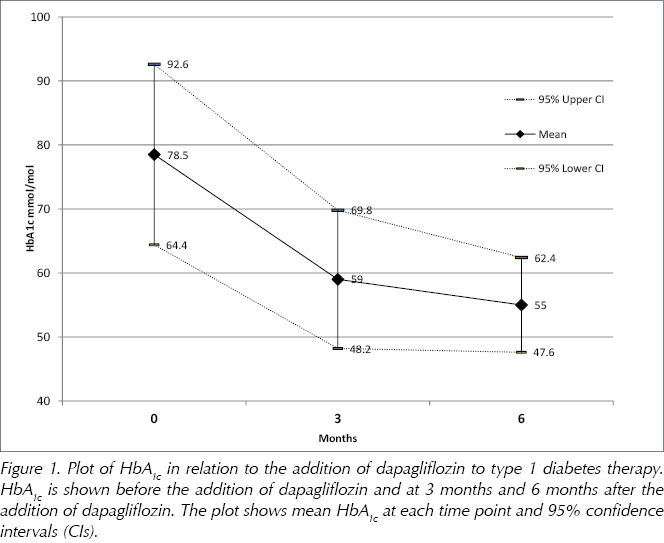 Analysis of the flash glucose monitoring records showed that the proportion of blood glucose readings on target (4–10 mmol/L) increased from 33.1% to 65.2% at 6 months following addition of dapagliflozin (P=0.007). The proportion of blood glucose readings above target (>10 mmol/L) decreased from 68.0% to 26.4% at 6 months after initiation of dapagliflozin (P=0.005).

“I was diagnosed with type 1 diabetes at the age of 30, and 18 years on I felt no further forward with my control. It seemed that the harder I tried the worse my control was and at times it just felt that insulin didn’t work, as in general my blood sugar was always high.

When my specialist nurse L. told me about dapagliflozin I was sceptical to say the least! I just didn’t like the description of how it worked and the possible side effects. However, after some thinking I decided to try the tablets.

Almost instantly things changed! It felt like suddenly insulin started to work properly and I started to get straight lines within target on my chart. I had never had this before; in fact, I have had some days of 100% in target. It’s the type of control that I just didn’t think was possible for me.

It has now been approximately 6 months since I started taking dapagliflozin and I have had no noticeable side effects.

Of course, nothing with diabetics is perfect and I still have the occasional bad day but now I can tell why and fix things quickly.

In my experience dapagliflozin has been a total game changer!”

These findings are persuasive evidence to support the addition of dapagliflozin in people with type 1 diabetes whose blood glucose levels are above target. After 6 months of adjunct dapagliflozin therapy, the mean reduction in HbA1c was 23.5 mmol/mol (2.1%) in these individuals. Thus, we conclude that the addition of an SGLT2 inhibitor has the potential to help people to manage their type 1 diabetes more effectively. The improved glycaemic control has major implications in terms of potentially reduced complication rates and reduced mortality in the future. In addition, the participant narrative gives a moving account of the way that this treatment changed the life of one person.

None of the users in this study attended a structured expert patient programme during the 6-month follow-up or in the previous 12 months. Therefore, the changes in glycaemia are likely to be a result of the addition of dapagliflozin, as far as it is possible to conclude this in a real-world case series.

The benefits of using SGLT2 inhibitors in the treatment of type 1 diabetes should be balanced against the increased risk of diabetic ketoacidosis (DKA). In the clinical trials, the incidence of definite DKA events was higher with dapagliflozin than with placebo (rates of around 4% in DEPICT-1 and 2.5% in DEPICT-2; Dandona et al, 2018; Mathieu et al, 2018). None of our participants experienced an episode of DKA on dapagliflozin, and the incidence of hypoglycaemia (83% of participants) was similar to that in DEPICT-2 (Mathieu et al, 2018).

The increase in absolute risk of an episode of DKA, even in closely supervised patients participating in clinical trials, raises a concern that DKA will be even more common if SGLT2 inhibitors are used routinely. A number of participants in studies have presented with euglycemic DKA (that with near-normal or only mildly elevated blood glucose levels), which has delayed recognition and definitive action. The increased risk of DKA may be attributable to patients on SGLT2 inihibitors not recognising early signs of metabolic decompensation, which can occur at relatively normal blood glucose levels. Thus, it may be advisable to limit adjunctive use of SGLT2 inhibitors in type 1 diabetes to those specialists who are cogniscent of the potential risks associated this class of treatment (Wolfsdorf and Ratner, 2019).

We have shown that the addition of dapagliflozin is an effective intervention to improve glycaemia in people with suboptimally controlled type 1 diabetes. If sustained, the improvements in blood glucose control seen here with dapagliflozin should result in reduced diabetes-related complications over the course of type 1 diabetes treatment.

The authors would like to acknowledge Vernova Healthcare CIC for supporting the evaluation of the intervention.

Any requests for data extracts will be considered by Dr Adrian Heald as corresponding author.