Despite the strong relationship between foot ulceration and callus, there is currently no accepted model for healthcare professionals to record the extent of callus and dryness of foot skin at annual checks. Here, the authors provide a pictorial scale to assist in assessment, improve tissue viability and reduce unnecessary expenditure. The scale also matches foot skin type with the most effective emollient.

Each year in the UK around 6500 people with diabetes undergo an amputation and up to 80% of these amputations are believed to be preventable. Most amputations are preceded by a foot ulcer. At any one time around 61 000 foot ulcers are treated by the NHS (Kerr, 2012).

For the person with diabetes, having a foot ulcer has a huge detrimental effect on their quality of life. There is the threat of further complication as well as the likelihood of psychological distress and anxiety. For the amputee there are the obvious difficulties in coping with limb loss, and mortality is 80% within 5 years of amputation (Young, 2012).

In an effort to reduce ulcerations, and therefore amputations, foot ulcer risk categorisation has been introduced as part of standard diabetes care. In England, Wales and Northern Ireland, NICE (2004) requires that people with neuropathy and skin changes be treated as high risk and be provided with appropriate skin care. This evaluation is typically undertaken at the annual review required by the clinical guideline; this will normally be conducted within a primary care centre by a member of the nursing team. In Scotland, SIGN (2010) suggests that the presence of callus is also an ulceration risk factor in the diabetic foot.

There are clear and well documented techniques for screening for the loss of protective sensation, peripheral vascular disease and foot deformity (Baker et al 2005; www.diabetesframe.org). Calibrated monofilaments and Doppler ultrasound devices assist in these assessments.

Assessing foot skin dryness
Despite studies showing that 80% of foot ulceration occurs at sites of callus formation and that, in a neuropathic foot, a site of callus is 11 times more likely to ulcerate than a site without callus (Murray et al, 1996; Baker et al, 2005), there is currently no accepted model for healthcare professionals to record the extent of callus and dryness of foot skin at annual checks. In addition, a wide range of emollient products are available; making the most appropriate choice confusing for both healthcare professional and person with diabetes.

Figure 1 is a pictorial scale matching foot skin type with the most effective emollient is presented to assist this assessment, improve tissue viability and reduce unnecessary expenditure. This model enables healthcare professionals to record the dryness of foot skin at the annual foot check, as required by national clinical guidance. The skin scale provides a basis to make an informed decision as to the extent of any skin changes that have occurred in the year between the annual checks, and assists with appropriate onward referral to specialist care.

The photographic scale
The scale has been developed to be easily understood and to give clear lines of definition between each photo on the scale, which is backed by a written description for any borderline decisions. The four photos show the typical range of feet which are seen in clinical practice (Figure 1). The photographs are split into lines of three – the first three pre-callus and the second three all with callused skin.

There is also a recommended emollient plan for each of these foot skin conditions.

Drivers for emollient pathways
People with diabetes and healthcare professionals should refer to the NHS Constitution (2013), which identifies three key principles to be considered when advising and prescribing an appropriate skin care plan:

These principles are supported by NICE guidelince (2014), which suggest that “treatment and care should take into account patients’ needs and preferences”. This advice suggests that the primary concern should be the efficacy of the product prescribed and – in the case of an emollient – its convenience, smell, feel and texture (NICE, 2004).

Patient compliance is especially important with any preventative care regimen and, where possible, emollients, which require just a single daily application, should be recommended. Such products would also have the benefit of reducing the cost burden to the person with diabetes and the NHS. In 2011, Samroo et al reported that only 28% of patients were compliant with their foot skin emollient regimen and Locke et al (2012) published that identification of an effective emollient was paramount in reducing the burden of repeated multiple-times-a-day applications, and that by reducing topical emollient application regimens to once-a-day, patient compliance may improve.

The condition of the skin at presentation is a further factor in determining an appropriate emollient. Callused skin requires an emollient with keratolytic properties in order to be effective. However, skin which is not callused can be treated by a non-keratolytic emollient. The removal of callus reduces plantar pressure by 26% (Young et al, 1992), and people with diabetes and callus could achieve this through the use of a keratolytic emollient.

Neuropathy is the main predictor of foot ulceration. The presence of neuropathy increases with age and duration of diabetes. Neuropathy will therefore become an increasingly common condition with our ageing population. Nerve conduction tests demonstrate a prevalence of early peripheral neuropathy in at least 50% of people with diabetes (Tesfaye et al, 2011) and clinically detectable neuropathy is present in one-third of all people with diabetes (Monteiro-Soares, 2012), increasing the risk of foot ulceration.

In addition, the disruption of microvascular skin blood flow and sudomotor function may be among the earliest manifestations of diabetic autonomic neuropathy and this leads to loss of sweating, dry skin and the development of fissures and cracks that allow the entry of microorganisms. These changes ultimately contribute to the development of ulcers, gangrene and limb loss. Therefore, it is essential that neuropathy is detected early and patients instructed to apply emollients as a prophylactic measure.

Selecting a foot-specific emollient
In the UK, many healthcare professionals prescribe a standard emollients for the skin changes depicted in Figure 1 grades 1 to 2. These creams are typically designed for skin anywhere on the body and require twice-daily application. Continued use of these creams is important. However, given that the skin on the heels is much thicker than skin elsewhere on the body and has different physical and mechanical properties, there is a strong case for using a specific emollient for the skin on the foot. In particular, an effective, scientifically proven, foot cream with a single daily dosage.

Recognising that many people with type 2 diabetes will have difficulty applying foot skin cream, there is also a strong argument for a formulation that allows once daily application (Baird et al, 2003). For those in levels 3–4 (Figure 1) a product with keratolytic properties is appropriate. Urea and salicylic acid both have keratolytic properties, however, due to the erosive properties of salicylic acid on the strata corneum the use of salicylic acid is contraindicated for the diabetic foot (Pray, 2010). Therefore, urea containing creams are the emollient of choice for the diabetic foot and 25% urea creams have been demonstrated to be more effective in treating callused feet than 10% urea creams (Baird et al, 2003). Given the patient and practitioner reported outcomes and feedback associated with Dermatonics Once Heel Balm, combined with its suitability as a single daily, this product is recommend as the emollient of choice for hyperkeratosis on foot skin for people with diabetes (Locke et al, 2012).

The national burden of diabetic foot disease
The Putting Feet First Campaign launched in February 2013 (Diabetes UK, 2013) disclosed that 46% of patients who develop foot ulceration have never attended an NHS Podiatry clinic. This indicates the need for improved methods of screening patients in Primary Care in order to detect the signs of deterioration of foot skin in neuropathic patients, alongside adoption of best practice in prescribing foot skin emollients and improved referral pathways.

In 2010–11, the NHS in England spent an estimated £639–£662 million on diabetes foot care, treating 61000 ulcerations at any given time, and performing 6000 amputations per annum (Kerr, 2012). Studies suggest that only 50% of patients with diabetes who have had an amputation survive for a further 2 years. Even without amputation, the prognosis is poor. Only around 50% of people with diabetes who have had ulcers survive for 5 years (Young, 2012).

Increasing evidence suggests that prevention of diabetes-related foot complications can significantly reduce the costs associated with long-term wound care and surgical amputation (Driver et al, 2010). Analysis of prescribing data for 2011 shows that the cost of prescribing a specialist foot skin emollient was around £750 000 reaching approximately 20 000 people with diabetes in the UK. However, there are an estimated 1.1 million people in the UK classified as being at increased or high risk of foot ulceration (Townson, 2013). This would suggest that only 2% of those people identified as being at risk are receiving the effective and appropriate skin care that national guidance recommends. A recent legal ruling in England decided that NHS Trusts can only choose not to follow NICE Guidelines where a special factor exceptionally justifies them not doing so and therefore diabetes patients should not be denied effective emollients on the basis of cost as the case for efficacy is proven (NICE, 2014).

Health economics
For the majority of people with diabetes low cost and widely prescribed creams are appropriate. The investment in a higher cost cream will be subject to the person presenting with neuropathy and callused feet, which are known risk factors for ulceration.

Cost-effective prescribing is an increasingly important factor in all personalised care plans. The annual costs of a year’s supply of the recommended emollient for the high-risk group are estimated at around £25–£33 per person (Dermatonics, data on file), compared with average ulceration costs of £6500, and quality-of-life costs of ulceration put at £25 000 per ulceration (Kerr, 2012).

Utilising a health economic model indicates that moving high-risk patients to the once daily, 25% urea cream would require less than a 1% reduction in ulceration and amputation rates to be cost-effective (Dermatonics, data on file). Further savings would be associated with improvements in quality of life, making the switch to a once daily application even more attractive.

Conclusion
Given the high human and health services costs associated with diabetic foot ulceration, there is a determination shared by all stakeholders to reduce ulceration rates. The introduction of this clear, foot skin assessment model will improve the ability of healthcare professionals in the primary care setting to respond effectively to the needs people with diabetes, improve outcomes and comply with national guidance. The Skin Scale is currently being validated and the results will be published later this year.

In Scotland, SIGN (2010) states that areas of dry skin should be moisturise, and in the rest of the UK NICE (2004) states that the NHS should provide appropriate foot skin care for people with diabetes who are at high risk of foot disease. By prescribing Dermatonics Once Heel Balm for callused skin in this risk group, healthcare professionals will comply with what the authors believe is best practice for emollient use. 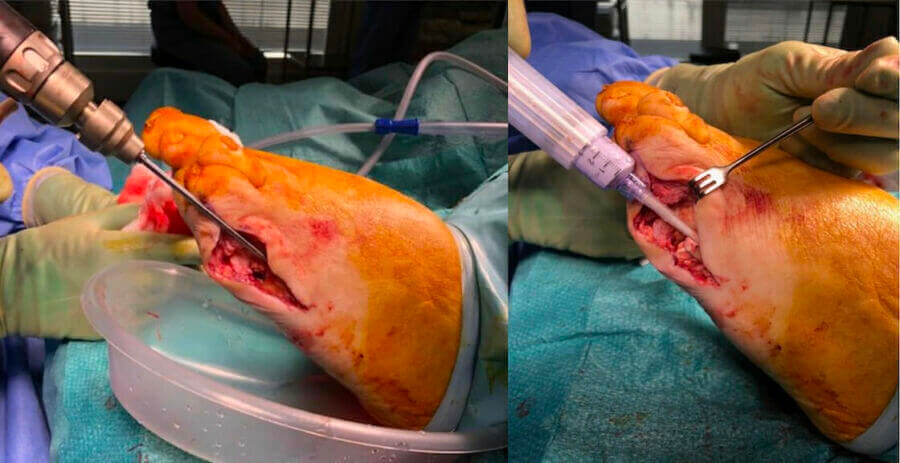