New thinking in dementia and diabetes

An assessment of the evidence linking dementia to metabolic health and how lifestyle advice may offer hope to patients.

In the last few years, significant paradigm shifts have occurred in our understanding of both type 2 diabetes and dementia, leading to a radical reconsideration of both, with major implications for prevention and treatment in both conditions.

Until recently, type 2 diabetes was viewed as a progressive failure of the pancreas, caused by genetic and degenerative factors. NHS inform (2019) describes it as “a lifelong condition that causes a person’s blood sugar level to become too high.” The DiRECT study has shown that it is not lifelong, but reversible in many cases; the primary issue is now seen to be hyperinsulinaemia and insulin resistance from excessive dietary sugar, with metabolically active fat deposition in the pancreas, liver and elsewhere.

In dementia too, we are on the verge of a paradigm shift. In 1906, Alois Alzheimer first recognised the abnormal features that characterise the condition named after him: the neurofibrillary tangles of abnormally phosphorylated tau and the senile plaque of beta-amyloid. This “amyloid and tau” hypothesis has dominated research looking at possible treatments, and many current researchers still view these proteins as causal (Aoyagi et al, 2019).

However, the multiple failure of drug trials that targeted amyloid and tau, including some which successfully clear the proteins from the brain but do not lead to an improvement in cognitive function, has led to a rethink as to whether these proteins are, in fact, causal. According to this new hypothesis, dementia is a by-product of neuronal damage, with the main recognised factors currently felt to be:

This “metabolic hypothesis” of dementia has a number of implications. You will already have spotted the links between dementia and diabetes; indeed, some commentators have called dementia “type 3 diabetes”. Figure 1 briefly summarises these links. 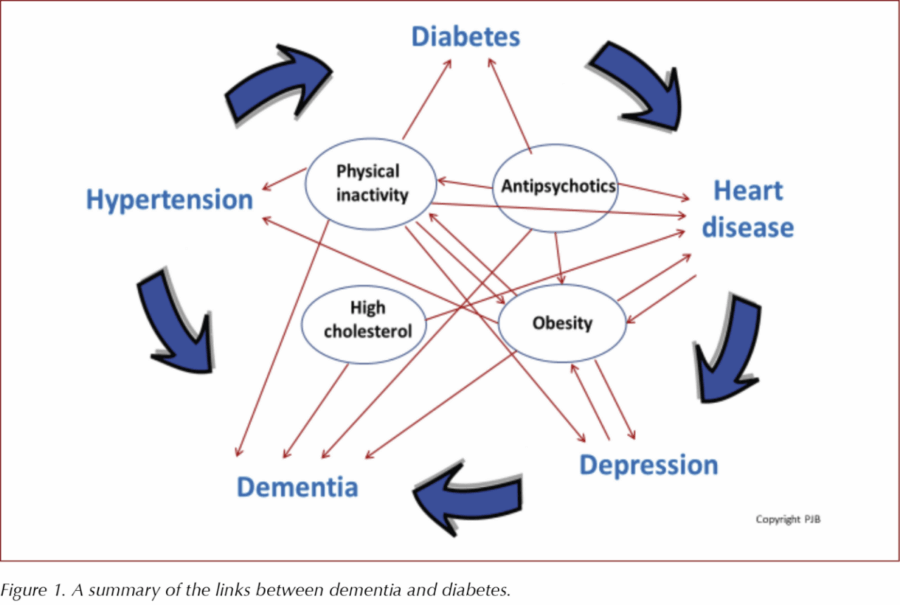 The first implication of this is that a simple “magic bullet” approach to dementia is unlikely to succeed. We need a note of caution here: although the 30 or so drug trials based on the amyloid and tau hypothesis have been unsuccessful to date, a couple are still awaited, so may yet be shown to have benefit. However, this negative message has an upside. We may already have the key to preventing many cases of dementia – improving neuronal health.

What evidence is there for this? Five years ago, a group of specialists produced the Blackfriars Consensus, a statement on brain health looking at dementia risk reduction. Since then, there have been several studies that have come to broadly similar conclusions and, in May this year, we had the first guidelines from the World Health Organization guidelines (2019). The conclusions are in line with previous studies and can be summed up in the simple phrase “what is good for the heart is good for the brain”. Smoking, excess alcohol, lack of exercise and metabolic syndrome (obesity, hypertension, dyslipidaemia and type 2 diabetes) are all risk factors for which the WHO finds evidence of benefit from intervention, as well as “very low to low” evidence for cognitive training. Most studies show that these primarily lifestyle interventions can reduce dementia risk by around 30%: in the UK, this would mean about quarter of a million people could escape this most feared disease. Genetic factors have only about a 7% effect. And there is now very early evidence that (unlike acetylcholinesterase inhibitor or memantine) they can reduce the rate of progression of early dementia.

Another implication of this hypothesis is that it seems to relate to most cases of dementia. Alzheimer’s disease (AD) is the commonest sub-type, accounting for around two thirds of all dementia. Because of its characteristic amyloid/tau changes, it is AD that has generally been selected for current drug trials, with almost no research on vascular dementia and other rarer causes. One might think that the “…good for the brain” mantra applies only to vascular dementia but, in fact, it seems to affect AD equally, though probably less so to Lewy body dementia, associated with Parkinson’s disease, or fronto-temporal dementia and other rarer subtypes.

This is, perhaps, counterintuitive and suggests that the primary pathology is not simply the vascular health of neurons, but that the factors implicated in vascular health are the same as those affecting neuronal health: that would certainly explain why statins seem to have very little protective effect in dementia. We could dance on the head of a pin trying to tease out causation: is it diabetes or obesity that causes dementia or are both caused by the same underlying factors? Does exercise reduce dementia because of its effect on weight or blood pressure, or by another mechanism? However, the mechanism is not really critical. What matters is that we know that the interventions are effective.

As a GP, I find this new way of thinking refreshing. In dementia, as in diabetes, we can hand back some responsibility to our patients to have control over their health. We can use the understandable fear of dementia to reinforce our existing healthy lifestyle advice, and also give hope to our patients that they can reduce their risk of dementia by a third.

World Health Organization (2019) WHO Guidelines on Risk Reduction of Cognitive Decline and Dementia. WHO, Geneva, Switzerland. Available at: https://bit.ly/2JmpdUz (accessed 29.05.19)

Supporting type 2 diabetes self-care across Wales during a pandemic

Need to know guide: Making sense of blood pressure readings in those with diabetes

How to diagnose and treat hypertension in type 2 diabetes

Evidence that protection against type 2 diabetes offered by some antihypertensive drugs.

A printable guide to SGLT2 inhibitors, organised by drug and by indication.