Near-normal blood glucose levels from shortly after diagnosis have been shown to correlate with improved long-term outcomes in people with type 1 diabetes (Jackson et al, 2013; Nathan et al, 2014). Current NICE guidance advocates that education on carbohydrate counting be delivered to children and young people (CYP) with diabetes and their families from diagnosis (NICE, 2016a). This involves calculating the carbohydrate content of a meal and delivering insulin doses calculated from a predetermined ratio (level 3 carbohydrate counting). This strategy allows the child or young person and their family to adjust insulin doses to match carbohydrate intake, thus helping to reduce blood glucose excursions around meals. It also allows the CYP and their families to have greater flexibility in managing their diabetes (Anderson, 1997). This guidance is reflected in the NICE quality standards relating to paediatric diabetes care (NICE, 2016b).

Background
Prior to 2016, Bristol and Weston Paediatric Diabetes Service had routinely deferred the teaching of carbohydrate counting skills until a few months after diagnosis. This approach in part reflected the challenge of maintaining carbohydrate counting skills in a large team of ward-based nursing staff across several wards who provide care for children with newly-diagnosed diabetes alongside the specialist diabetes multidisciplinary team (MDT) in a busy tertiary children’s hospital. It also resulted from a lack of specialist diabetes dietetic time.

Investment in the diabetes MDT, which provided additional dietetic resources, enabled service development. The aim was to increase the proportion of children and their carers who were level 3 carbohydrate counting from diagnosis, with the expectation that this would result in a significant reduction in HbA1c by 6 months post-diagnosis. At the outset, in July 2016, guidelines and resources for ward staff and family members were updated to ensure consistency of information and advice delivered by both ward staff and members of the diabetes MDT.

An audit was subsequently carried out to determine the proportion of CYP and their carers able to carbohydrate count at their first MDT follow-up appointment and monitor the subsequent change in patients’ HbA1c levels 6 months after diagnosis. This service development remains in operation and is currently being re-audited.

Teaching also included ‘eating out’ arrangements and how to implement this as consistently and accurately as possible without implementation being overly time-consuming for a family. After this, a dietitian set the bolus advisor with an individualised insulin:carbohydrate ratio (ICR) based on 300–500 total daily dose formula, providing parents were able to demonstrate good carbohydrate counting skills and safe use of the bolus advisor.

At the end of the first session, patients were given a food diary to complete at home. The food diary documents a family’s ability to recognise and count carbohydrates and the effect of ICRs on blood glucose levels. The diary was reviewed during the second session, which took place approximately 1 week after the first session. At this time, the dietitian offered the CYP and family members help with any difficulties that they might have had. The dietitian also adjusted the ICRs and provided further re-enforcement of the previous teaching, if required.

Audit
To test the effectiveness of this intervention, an audit of medical notes for all patients offered the new education package from July 2016 to January 2017 was undertaken. CYP with newly-diagnosed type 1 diabetes were numbered sequentially during this period and compared with a historical control cohort from between July 2015 and January 2016, before the education package was introduced. Carbohydrate counting education was delayed until a few months post diagnosis in the historical group due to limitations in dietitian/specialist nurse availability for early education. The historical cohort was treated with fixed insulin doses at diagnosis rather than ICRs as patients were given a standard blood glucose meter that could not offer bolus advice. No other changes in the management of CYP newly-diagnosed with type 1 diabetes were introduced during this period. To ensure we were testing the effect of implementing the new carbohydrate counting initiative, we excluded Bristol-based patients who had received their diagnosis and initial care in another trust/country (n=2). In total there were 52 patients: 25 in the intervention group and 27 in the historical cohort.

There were two audit standards, see Box 1. Details about CYP and their families’ engagement with the education package delivered by the dietitian and patients’ HbA1c results were collated using a bespoke database, the nursing and dietetic patient records. Once inputted in a Microsoft Excel spreadsheet, the data were anonymised in line with the University Hospital Bristol’s audit department guidelines and then analysed. An unpaired t-test was used for interval data comparing mean HbA1c and mean time to clinic follow-up. Fischer’s exact test was used for the nominal data comparing numbers of patients with an HbA1c below the agreed cutoff of 48 mmol/mol (6.5%) and comparing those in the two groups who could and could not carbohydrate count at their first MDT appointment. Figures were created using Microsoft Excel and statistics were performed using Graphpad.com free calculators.

Results
The two groups had similar demographics and clinical characteristics at diagnosis, see Table 1. Children in the historical control group were slightly younger than those in the intervention group, see Figure 1. No patients in either group were initiated on an insulin pump or continuous glucose monitoring during the audit period. 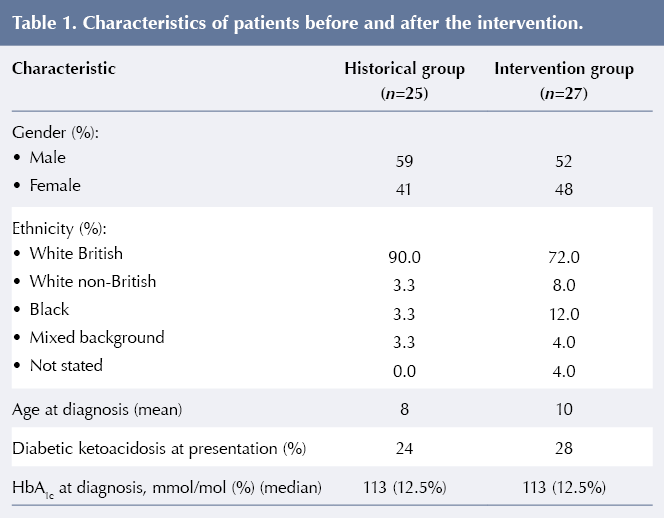 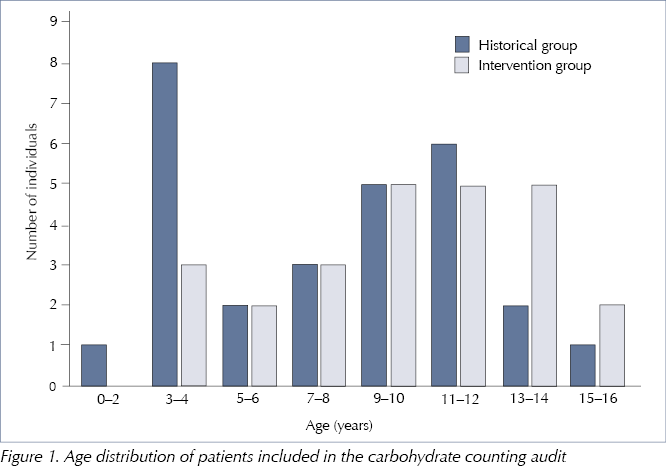 Historically, the first diabetes MDT meeting was scheduled 6–8 weeks after discharge following diagnosis. The average number of days before a patient’s first MDT appointment dropped from 57 days in the historical group to 31 days following the implementation of early education in carbohydrate counting. The proportion of patients/carers able to carbohydrate count at this appointment significantly increased, from 34% in the historical group to 84% in the intervention group (P=0.0005). 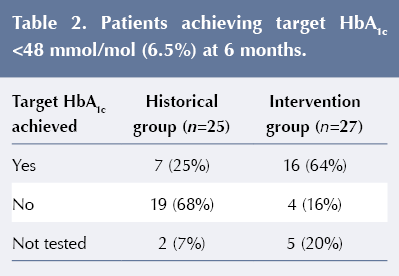 The two audit groups were similar in terms of gender, ethnicity, initial HbA1c and whether or not they presented with diabetic ketoacidosis. The historical group was slightly younger; however, we do not feel that this would have exerted a large effect on the outcomes measured. Our experience is generally that the engagement of families with young children with type 1 diabetes is better than from families with older children, where the children themselves are co-managing the carbohydrate counting.

The diabetes MDT considered that patients/carers should only commence level 3 carbohydrate counting when assessed as competent to do so. In the intervention group, four (16%) of the CYP and/or their carers were not carbohydrate counting at their first MDT clinic appointment, largely due to reduced numeracy or literacy skills. These individuals and their families have received ongoing support to work towards carbohydrate counting.

As this audit was a retrospective case control study, there is the possibility of bias affecting the results; however, we used the objective measures of ICRs at clinics and HbA1c to minimise recall bias. The groups had similar demographic characteristics and diabetes severity at presentation and there had been no large structural re-arrangements of the diabetes team between the periods analysed, so we feel the reduction in HbA1c at 6 months is related to the intervention.

In the first 6 months post diagnosis, patients with type 1 diabetes often show a ‘honeymoon phase’, where normal blood glucose levels are more frequently achieved than in the longer term. The duration of the honeymoon period is variable and is dependent on lateness of diagnosis (ie whether patients present with diabetic ketoacidosis or not) and the effectiveness of early treatment (Abdul-Rasoul et al, 2006). This can make it difficult to assess the effect of an intervention on HbA1c. We compared the same 6-month post-diagnosis period in both cohorts, which would include any potential honeymoon phase, so the improvement in HbA1c between the groups is not likely to be due to this.
Our audit only initially examined the HbA1c at 6 months post diagnosis. Further monitoring of the HbA1c levels of these patients will be useful to determine whether this improvement is sustained. After the initial 6-month follow-up period there was a significant service reorganisation that included the introduction of point-of-care HbA1c testing. This change may have an impact on the data gathered and therefore effect the veracity of any data comparisons. A re-audit is currently being undertaken.

Conclusion
It is possible to deliver effective training in level 3 carbohydrate counting skills in line with NICE recommendations on an outpatient basis following discharge from a busy tertiary children’s hospital. Earlier introduction of carbohydrate counting was associated with a greater proportion of CYP achieving target HbA1c within 6 months of diagnosis. Longer-term follow-up will be required to determine whether this early reduction in blood glucose levels is sustained beyond the immediate post-diagnosis period.