The only constant in life is change: A case study of new working practices for podiatry and district nursing due to COVID-19

COVID-19 resulted in a lockdown situation in the UK from March 2020. Overnight, traditional working practice became untenable. Recognition of the necessity to work differently and to implement these alternative practices swiftly became a reality. It was not feasible for all patients to attend podiatry clinics, or for staff to perform their conventional roles. Shielding and social distancing meant that available numbers of podiatry staff were reduced, while people with diabetes were scared and, in some instances, unable to venture out of their homes. However, the need to provide safe, high-quality diabetes footcare for the population remained and even became increasingly vital. The present authors collaborated to develop new working practices within the podiatry service and district nursing teams on the Isle of Wight. In this case study, they describe this process and the effects it had on care.
As of 16 September 2020, the Isle of Wight had recorded 446 confirmed cases of COVID-19 and 88 deaths as a result. Although these rates were significantly lower than in surrounding NHS Trusts, given the very high proportion of older people on the island, it was imperative to try and prevent a high R0 rate from the outset. At the time, the R0 rate of the island stood at 0.571.

Diabetes makes an individual more susceptible to adverse COVID-19 outcomes, including mortality (Barron et al, 2020; Holman et al, 2020). Furthermore, many of the risk factors for adverse COVID-19 outcomes are the same as those for diabetic foot ulcers and subsequent limb loss, including high HbA1c, BMI and reduced renal function. If a person with diabetes is unable to attend an urgent podiatry appointment, then the request for an emergency dressing would impact on the workload of the district nursing team, as podiatry are not commissioned to provide domiciliary care.

Historically, the Isle of Wight has had lower levels of diabetes-related amputation than its demographics would suggest. The directly standardised rate (DSR) for the island is 5.8 major amputations per 10 000 population-years, versus the English average of 8.2. This is despite the island’s high levels of deprivation and the demographic of a white, elderly population with one of the highest per capita rates of diabetes in the country. In 2019, the population of the Isle of Wight was 141 538, of whom 9565 had confirmed diabetes: a prevalence of 6.76%, the national average being 6%.

Rogers et al (2020) recognised that, during the pandemic, podiatrists would have to mobilise and adopt a shift away from hospital-based to community-based care. Their goal was to reduce the burden on the healthcare system by keeping diabetic foot and wound patients safe, functional and at home. Almost overnight, COVID-19 changed how district nursing and podiatry had to collaborate to enable this process.

The opportunity to further develop the podiatry team on the Isle of Wight by embracing the changes necessitated by COVID-19 was a welcome prospect. Technology had previously been developed in conjunction with the Technology Enabled Care team manager, podiatrists and a set of willing district nursing team leads and nurses. The WHZAN telehealth system (WHZAN Digital Health, Ryde, Isle of Wight) allowed virtual consultation between podiatrists, nurses and their patients. Such technology enabled photographic records of wounds to be taken securely and in line with GDPR requirements, ensuring that the podiatry staff could see how wounds were developing or improving. The district nursing team could quickly refer patients whose feet had deteriorated for rapid triage and care. This technology was incorporated and increased confidence for staff working in a home environment rather than the usual clinical situation.

Why was this important? We were prepared for large numbers of deaths and, as with all areas, we knew that district nurses would likely be seconded to help with end-of-life care. A gap in provision thus existed, which the podiatry team was prepared to fill. This followed on from joint working where the district nurses had been trained by the head of podiatry and each locality was given a screening box for people with diabetes, to ensure that the NICE (2019) requirement for annual foot screening could be combined on a single visit and to avoid duplication.

The interim part of the 2019 NHS Long Term Plan supports the promotion and implementation of new ways of working to improve patient care (NHS, 2019). A collaborative care approach to complex DFU was discussed by Stanley and Turner (2004), where a podiatrist and a tissue viability nurse established new working relationships to deal with a particularly difficult case. Podiatrists primarily deal with wounds pertaining to the foot and ankle, and nurses (particularly district/community nurses) are experts in the field of leg dressings. In essence, approximately 8% of the whole district nursing workforce time is spent on venous leg ulcers, with 2.1 million visits annually (Leading Change, Adding Value Team, 2018). The extended scope of the podiatrist encompasses wound care, particularly in the management of DFU.

COVID-19 provided the opportunity for the podiatry team to up-skill, to learn new models of care planning, and to encounter and work alongside the district nurses. There were barriers initially, both perceived and real. In hindsight, most of these barriers were in actuality perceived, as the podiatry team realised that applying compression stockings for leg ulcers and administering insulin and Clexane injections were skills that could be developed. The exchange of knowledge and expertise became learned behaviours for the team and were readily put into practice.

Podiatrists were trained to complete compression bandaging. The authors believed that this would not be too challenging as podiatrists are already skilled at completing ankle–brachial pressure index tests. Many podiatrists will be aware of the bandaged leg ulcer patients who attend for podiatry, and most will acknowledge that, at least once in their working life, they have avoided removing dressings to check the whole foot, as the nurse had done such a good job with leg compression that the podiatrist did not want, or even have the skills or dressings, to replicate the work. These are missed opportunities to look at vasculature, pressure areas on heels, skin vitality and general appearance. It was noted first-hand how the skills of the nurses in terms of leg ulcer dressings improved the venous return in ulcers that previously were static.

Previously, McIntosh and Ousey (2008) analysed data from a survey of podiatrists and nurses regarding offloading. Offloading is an established evidence-based strategy in the treatment of DFU (Armstrong et al, 2005) but, despite this, only 55% of nurses questioned would offload as a management option, while 100% of podiatrists would do this as standard procedure. During this initiative, the podiatry team suggested offloading, and the nurses watched the podiatry team debride and observed how removal of dead tissue to a healthy healing base was in some instances quicker and more effective than use of particular dressings.

The nursing team undertook joint visits with the podiatry service initially and then, as time progressed, there was an expansion of mutual understanding and a build-up of trust. The nursing team was peer-reviewing cases and ascertaining effective and beneficial opportunities for both team members. 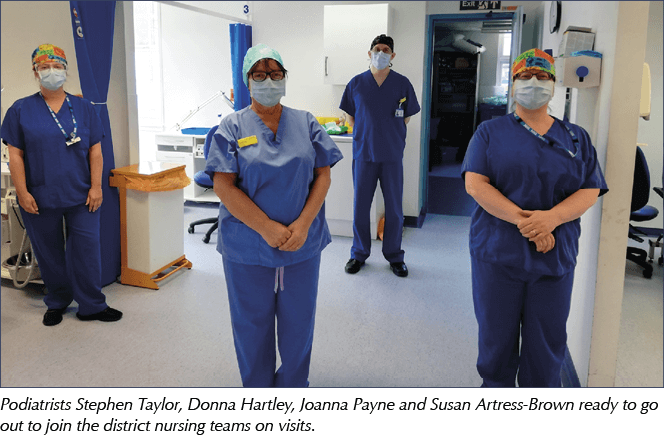 Initially, there were conceptual and perceptual barriers to visiting. The Isle of Wight podiatry team did not undertake domiciliary visits previously, as it was not commissioned to do so; rather, patients attended clinics. There was also the spectre of COVID-19 and fear of spreading the infection. However, despite initial reservations, the patients were overwhelmingly happy to see the new practitioners. The benefits for them included a reduction in duplication of visits, with a new set of eyes looking at a wound and viewing it from a different perspective.

Previous barriers that might have prevented multi-professional collaboration between nurses and podiatrists were removed. Poor levels of communication, lack of awareness of the others’ roles and limited exposure to multi-professional learning were reduced markedly, at first through necessity and then further through realisation of the beneficial effects.

The Improving the Quality of Orthotics Services in England document placed an emphasis on effective team working: working for the good of a goal, with a common aim and working together to achieve it (NHS England, 2015). The document explains that a multidisciplinary approach should always be encouraged and applied, where appropriate.

The We Are the NHS: People Plan points to collaborating, sharing good practice, embracing innovation and supporting the huge change that we have all witnessed since lockdown started (NHS, 2020). Podiatry as a profession has encountered a massive technological shift. The podiatry team now uses Microsoft Teams, Zoom and Attend Anywhere, it attends online webinars and has demonstrated flexibility, innovative practice and change management, adapting at a very rapid rate to the changes. Despite challenges, podiatrists have shown that they want to be part of the change conversation, using their transferrable skills and capability within their remit to work across disciplines. In the authors’ case, the district nurses were engaged to do likewise. The new model of working offered the chance to share problems, discuss possible solutions and reflect on our practice, thus ensuring that the care provided remained patient-focused throughout.

Care was delivered to people with DFU in a novel way, in which decision-making was an immediate shared response to the problem presented. The professional barriers that may have existed previously were removed as a result of this new situation. The ability to change and adapt immediately and identify service delivery opportunities was made possible. This enabled patients and their families to benefit from reduced travel, reduced social contact and increased opportunity for quicker healing times, as care was responsive to their current needs. Recognition of early intervention and prevention of pressure ulcer development reduced the need for admissions at a point in time when there was extreme fear of COVID-19 proliferation.

Moving forward, the Isle of Wight podiatry team is looking at the possibility of a joint post to enable knowledge and skill sets to be developed and put into practice and, ultimately, for collaboration and partnership working to become the norm despite any barriers. It was concluded that an open approach to care delivery can reap benefits, not just for clinicians but for patients and their support networks as well.

This article was originally published in The Diabetic Foot Journal and has been adapted for the Journal of Diabetes Nursing. To read the original, full-length article, click here.

Quick guide summarising the indications and dosing recommendations of diabetes drugs in people with diabetes and renal impairment.

Highlights from the European Association for the Study of Diabetes (EASD) virtual congress, held from 27 September to 1 October.